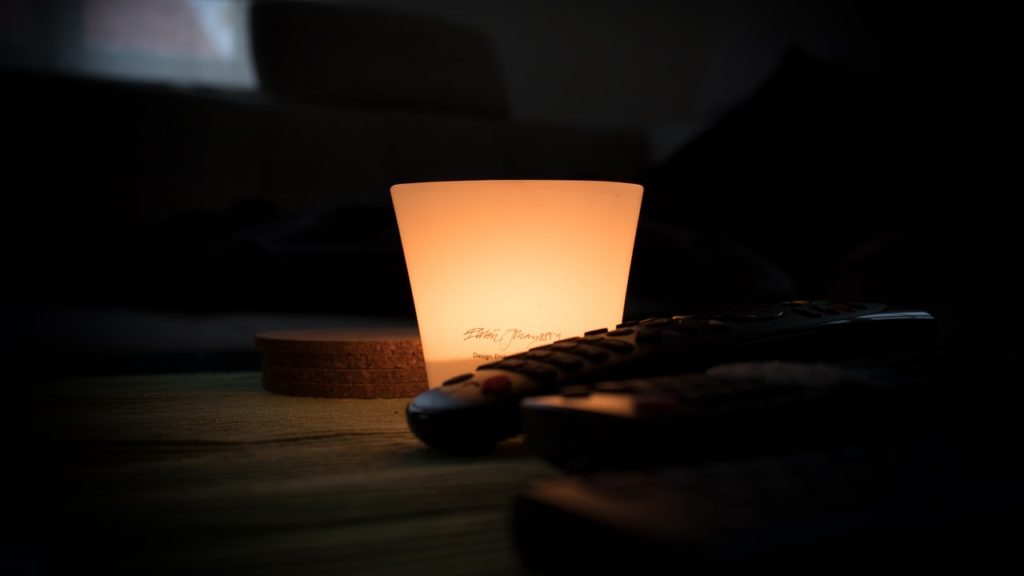 Have you ever wanted to turn off the lights without moving, especially when you started a film on TV or when you felt asleep after a busy day? If the switch is out of reach, it is most likely to leave the lights on. I inspired from that idea and built the perfect solution; an IR remote controlled light switch!?

With this easy-to-assembly IR controlled universal switch you can control not only your room illumination, but also turn on and off any device; i.e. your heater. The tiny software is designed to support most of the TV, DVD or Satellite remotes.

All you have to do is to build that circuit with easy to find components and connect it. TA-DA! Now you can press a key of your favorite IR remote to teach that key to it and then use the same key to switch it on/off.

Before giving the hardware and software, the usage should be described step-by-step.

The circuit is quite simple and it’s not necessary to make a PCB to build only one. I used a protoboard and the result is in the photo below. I use it as a normally-closed (NC) light switch. 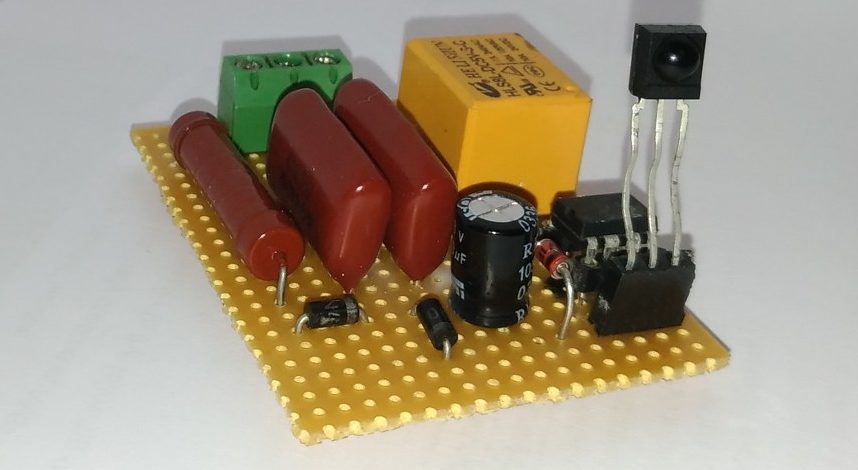 The circuit diagram is given below. 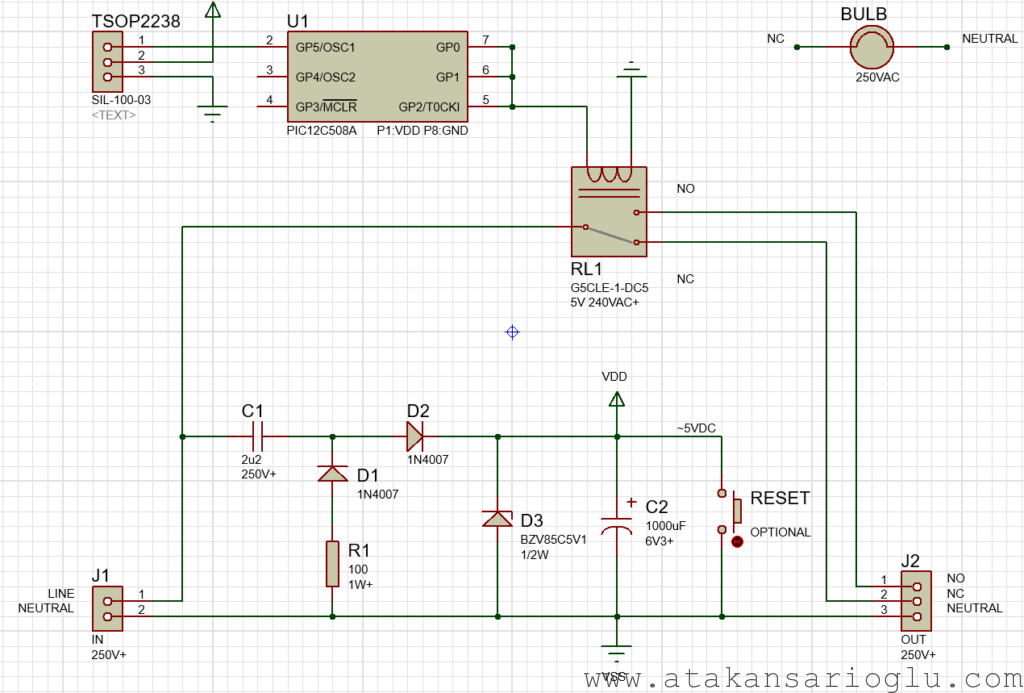 This circuit is designed to be connected in series to an AC load, so it has to be powered from AC mains (220VAC-240VAC, 50Hz). Keeping simplicity in mind, a capacitive power supply suits well to this project.

The left-hand side connector J1 is the AC input. On the positive half-cycle, current flows over C1, D2 and charges the capacitor C2 up to zener voltage of D3 (4.7V or 5.1V). On the negative half-cycle, if flows through R1, D1 and C1 without going further into the circuit.

For further reading on capacitive supply Microchip AN954.

The voltage ratings of the components are critical here. In addition, some components must meet specific power rating. The best practice to know the necessary ratings is simulation. Although the component library is not the richest, LTspice is a great tool for analog simulations and it comes for free.

For the low current mode, a current smaller than the sum of supply currents of PIC (0.625mA) and TSOP (0.7mA) should be drawn. 4k7 equivalent load will draw about 1mA and it is reasonable for the simulation.

For the high current mode, a current as much as the relay current must be used. The relay has 70R coil and the small currents drawn by the other components can be neglected. So the equivalent load is 70R.

The microcontroller reads the output of the IR receiver over GP5 pin and checks for known patterns. When a match is found, it drivers GP0, GP1 and GP2 to supply enough current to drive the coil of the relay (The maximum current sourced from a pin is 25mA and the relay draws 75mA) There is no need for a reverse diode between the coil pins when using 3 outputs because PIC has already reverse diodes (each capable of clamping 20mA). When a higher demanding relay is connected, GP4 can also be paralleled to those 3 pins but it is not smart to exceed the total current rating for a port which is documented as 75mA. 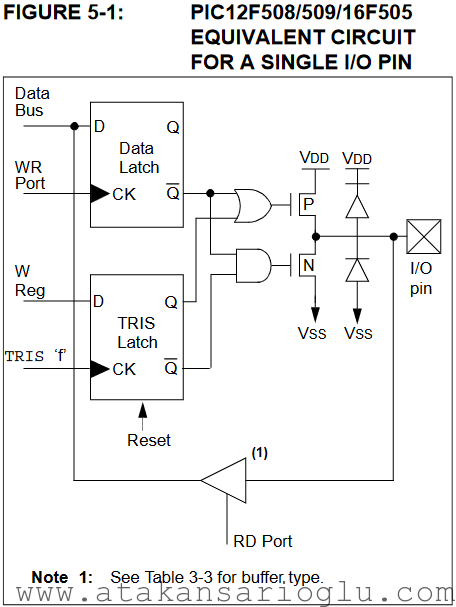 The implementation of the software was the most tricky part because it needed lots of inspection on different remote controllers. And the second challenge was the non-debuggable MCU.

Note that the output of TSOP (seen on the signals above) is inverted (active-low) but the software considers “0” as HIGH and “1” as LOW. So beware of that.

By inspecting the signals, an identification method is developed.

First, the start of a message must be detected. This will be done by detecting a long silence (LOW signal). We can consider any LOW signal that is longer than 5ms as an idle (inter-message) space.

Second, to read the message bits we also need to determine (and ignore) the preamble (the leading HIGH-LOW sequence) signal. If the first HIGH signal after the idle period is longer than a threshold, it can be considered as a preamble. This threshold value is 3ms to cover all models.

Finally, when a long silence is detected, the reception will be terminated and the received message is evaluated looking at its MARK and SPACE value. The last threshold that is used to determine that the bit is ended and also the message is ended at the same time. It is 3ms but could be the same as the idle time.

The most useful feature of this project is that is can work with any remote controller. To cover that requirement, a memorizing function is needed. The tiny MCU used in this project has only 512B (512x12bits) program space and it’s not possible to implement a fully functional protocol reader algorithm. A universal reader that only records and matches the meaningful IR bits is implemented instead.

The code is designed with setup and loop functions to make porting to Arduino easier. Setup function sets relay pins as output and TSOP pin as input then starts TMR0 by setting its prescaler.

The loop function runs the tasks and waits for the TMR0 to overflow the designed timeout. The settings in the header sets the looping frequency to 5kHz.

The state machine loops every 200us (1/5kHz) and is responsible for reading, storing , checking IR signals.

The source code can be compiled using MPLAB X + XC8 (tried with v4.05 and v1.44) or stress-free online compiler MPLAB-Xpress. If you think you are too lazy to compile yourself, the hex file is here.

The project is designed to be universal but there are always some exceptions. Everything is tested and works fine with the remote controller types listed above. When i have another remote controller i will also make the necessary tests with it immediately.

Due to the limitations of the MCU, a perfect software that covers every detail couldn’t be provided. It is also possible to switch to an Arduino UNO with the same logic and see what could be improved.